Billy Graham has finished his race on this earth at 99 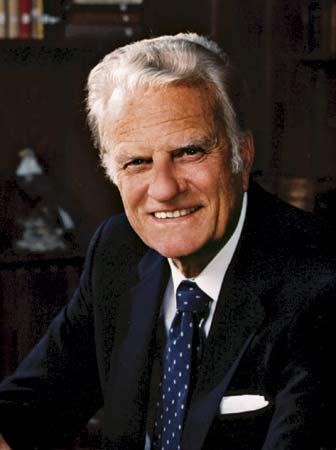 The Rev. Billy Graham, the charismatic North Carolina pastor who took his evangelizing crusades around the country and the globe, died on Wednesday morning, according to officials of his organization. He was 99 years old.

Evangelist Billy Graham, the man who preached the gospel to people across the globe. Many came to Christ listening to his preaching, many re-committed their lives listening to the sermons that Billy Graham preached.

Televangelist Joel Osteen told CNN that Graham was his hero, and said the best way to honor him is for Christians to continue what he started.
“Preaching good news and letting people know about Christ and the love and respect that we can show one another. I think it’s to continue on in that passion. He took great steps of faith. He paved the way for young ministers like myself.”

Condolences poured in from all over the world,

Vice President Mike Pence said in a statement that “Karen and I were saddened to learn of the passing of one of the greatest Americans of the 20th century, Reverend Billy Graham.”
“We send our deepest condolences to the Graham family. Billy Graham’s ministry for the gospel of Jesus Christ and his matchless voice changed the lives of millions. We mourn his passing but I know with absolute certainty that today he heard those words, ‘Well done, good and faithful servant.’ Thank you Billy Graham. God bless you.”

Graham began his missionary work in 1944 by speaking at rallies for the Youth for Christ Campus Life ministry.
Five years later, he branched out on his own, holding a tent crusade in downtown Los Angeles. Originally scheduled for three weeks, the crusade drew such large crowds that it was extended to seven; a radio disc jockey, a small-time mobster and an Olympic athlete were among those who accepted his altar call under the “Canvas Cathedral.”

The next year, Graham founded the Billy Graham Evangelistic Association.
The crusades, which soon became the signature feature of his global ministry, frequently blended well-known hymns, preaching and patriotic displays.

“His sermons contained just the right mix of patriotism and reproof,” said Molly Worthen, a religious historian at the University of North Carolina. “He urged Americans to stand strong against ‘godless communism’ but also criticized American hubris.”
Graham told an audience in Charlotte in 1958 that, “We have an idea that we Americans are God’s chosen people, that God loves us more than any other people, and that we are God’s blessed. I tell you that God doesn’t love us any more than he does the Russians.”
Graham’s crusades mobilized hundreds of volunteers not just from his own evangelical movement but also from liberal Protestant congregations and Catholic parishes.
His inclusive message — he said that theological differences were less important than Christian comity — angered some fundamentalists, who fulminated when he shared the stage with Catholic or liberal Protestant ministers.

Among his many popular sermons, if I could pick one sermon to listen over and over again it would be “Who is Jesus”, you can watch the sermon here:

Let us also live a life worthy of the blood shed by Jesus Christ for our sins and remember that “Hell is for Real, in our race to achieve worldly things let’s not forget the eternal gift which God has given us for free.”